Arm Liposuction - Before & After Results (large)

This Celebrity Arm liposuction gallery features before and after results of patients who have arms that are large in size. Some of the results are immediate after their surgery and some are after 3 months when patients are fully healed. The patients who are older or those with looser skin don’t have the same immediate tightening as the younger patients but may take days to weeks. Some patients with larger and looser arms will have moderate to severe wrinkles that could require a later arm lift or brachioplasty. However, our Celebrity Arm liposuction does create a significant degree of skin retraction that normal arm liposuction cannot achieve which can make it a good alternative to avoid an arm tuck in many women. Make sure before you decide on a surgeon for arm liposuction to look at all of their before and after results. We are confident you will not find many results that can even come close to what Celebrity Arms can do.


Mindy was unable to get rid of the fat on her arms through diet or exercise. She already had very strong muscles but could not see them. Celebrity Arms liposuction was able to remove the “winter coat” of fat hiding her shape underneath.

Lisa is a patient who had a large thickness of fat encompassing all surfaces of her arms. The effects of her arm liposuction was immediate and revealed a more beautiful shape with slimness and appearance of greater tone.  Her skin had wonderful retraction.


Sherrie, a patient in her late 40’s wanted slimming and tightening of her arms. You can see in the photos and the video that she had immediate slimming and contouring of her muscles. As expected with the procedure, her skin retracted very well with only a hint of looseness remaining.

This young patient genetically had a disproportionate amount of fat on her arms. Slimming the arms can have quite an effect of making a patient look slimmer overall.

This patient was close to 50 years old and had a significant amount of lower arm fat. Celebrity Arms liposuction with the skin tightening that it creates was able to give a slimming effect with an appearance of overall toning.

This patient with larger arms and thicker fat wanted a nicer shape. With circumferential liposuction sculpting she was able to have a significant improvement with a large degree of muscle contouring visible also.

This patient who was close to 50 years old had a large lower hang and loose skin. Many plastic surgeons would recommend an arm lift, arguing that liposuction would leave the skin looking looser. However, with Celebrity Arms liposuction the skin always shows a significant retraction, and an arm lift can sometimes be avoided.

Having a large amount of fat and looser skin usually leaves only an arm lift as a surgical choice. However, for patients that don’t want to have an arm lift and are tolerant of some loose skin, Celebrity Arms liposuction can be a good alternative. 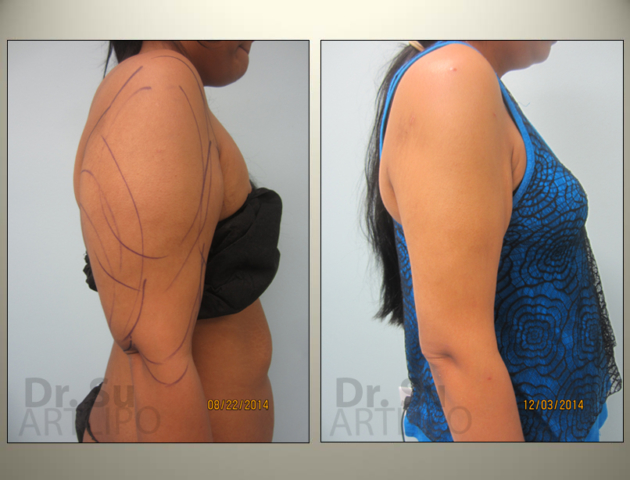 Having a large amount of fat and looser skin usually leaves only an arm lift as a surgical choice. However, for patients that don’t want to have an arm lift and are tolerant of some loose skin, Celebrity Arms liposuction can be a good alternative.

This patient had a very large collection of fat mainly in her lower hang. She had a very significant slimming and retraction of her skin which allowed her to avoid having an arm lift.

This patient with a large arm hang would usually be a candidate for an arm lift only. She and other patients who are not accepting of arm lifts now have a choice of surgical solutions. Celebrity Arms liposuction gives a strong skin tightening effect. For patients who can tolerate some degree of wrinkles this can be a great alternative to an arm lift.

Celebrity Arms liposuction is the best solution for a woman who has a very large amount of fat surrounding her entire arm and good skin elasticity. In a young patient like this, her skin will retract back fully leaving no looseness or wrinkles. The slimming results are amazing!